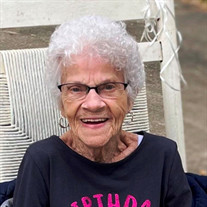 Billie Jean Smith, 90, of Clarksville, Arkansas passed away Wednesday, November 10, 2021. The family will receive friends between 2 and 4 p.m. Sunday, November 14, 2021 at First United Methodist Church in Clarksville. A private family interment will be 11:30 a.m. at Oakland Memorial Cemetery in Clarksville where Billie will be laid to rest next to her husband, followed by a Celebration of Billie’s life at 2:00 p.m. Monday, November 15, 2021 at First United Methodist Church with Rev. David Hanshaw and Sharon Ricketts, officiating under the direction of Shaffer Funeral Home of Ozark, Arkansas. Billie was born on April 16, 1931 in Moro, Arkansas to the late Rex Alexander Russell, Sr. and Tommie Ashmore Russell. On December 27, 1953, she married Robert Powell Smith. A devoted Christian, Billie was a faithful member of First United Methodist Church for 61 years. She was also a longtime member of the Supper Club and Purple Hats, and served her community for many years volunteering with the Hospital Auxiliary, Meals On Wheels and Mustard Seed. She enjoyed spending time with her family and friends playing games and cards, and was an avid sports fan, outstanding basketball player, water skier, and golfer, having won the Clarksville Country Club Women’s Championship many times. Billie was a devoted wife, mother and grandmother who loved her family dearly. Along with her parents, she was also preceded in death by her loving husband of 63 years, Robert Powell Smith; her two brothers, Rex Russell Jr, and Robert Russell; and her sister, Nona Taylor. She is survived by her son, Russell Smith and wife Sandy of Wichita Falls, Texas; her daughter, Rexanne Russell and husband Danny Ray of Alma, Arkansas; five grandchildren, Dustin and wife Alicia Smith, Cody Smith, Charity and husband Matt Knight, Danielle and husband Johnathon Dean, and Alex and wife Breanne McCarley; and eight great-grandchildren, Marlee, Tanner, Kinley, Charleigh, Kate, Caroline, Bennett, and Klara. Condolences may be sent to the family to Shaffer Funeral Home in Ozark, Arkansas. In Lieu of flowers donations can be made to the First United Methodist Church in Clarksville.

The family of Billie Jean Smith created this Life Tributes page to make it easy to share your memories.