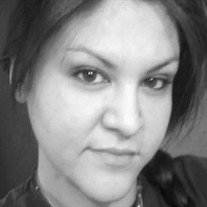 Angel Starr Pendergrass, 30, of Ozark, Arkansas died Saturday, June 1, 2019 in Ozark. She was a homemaker. She was born January 17, 1989 in Claremore, Oklahoma to Buddy and Donna Sheppard Pendergrass. She was preceded in death by her mother,... View Obituary & Service Information

The family of Angel Starr Pendergrass created this Life Tributes page to make it easy to share your memories.

Send flowers to the Pendergrass family.